Once again, Hubble has expanded the Universe of our knowledge.

This time, Astronomers found the actual color of a planet orbiting another star 63 light-years away.  The planet, HD 189733b, isn’t just blue, its big, at least the size of Jupiter.  The cobalt blue color doesn’t come from water reflection, like Earth, but most likely from the blow-torched atmosphere.  There is even speculation that there is solid silica rain (glass rain). 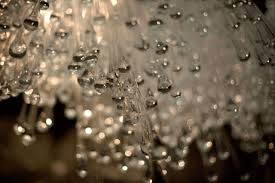 However fun a glass rain storm would be probably pales in comparison to the 2,000 degree Fahrenheit  (1093 Celsius) temperature and 4,500/mph (7242/ kph) wind.  Shards of glass flying at you very fast, what’s not to love about a planet like that?

Using Hubble’s Imaging Spectrograph, Astronomers measured changes in the color of light from planet HD 189733b during its transit behind the star it orbits.  Fortuitously, the planet’s orbit is tilted edge-on with respect to the Earth so the planet routinely passes in front and behind its star.