Just like a Shakespearian play, the two white dwarf stars in Henize 2-428 are circling each other toward a deadly embrace.

Each of the white dwarf stars have a little less mass than the Sun.

In about 700 million years the stars will merge into a Type 1a supernova, destroying both stars in a fiery final embrace. 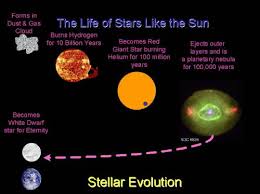 Normally at the end of the life of a star like our Sun, the white dwarf stage is fairly permanent.   However, these two are doomed to produce another spectacular event.

A tragedy worthy of the Bard’s ballad:

Two households, both alike in dignity,
In fair Henize, where we lay our scene,
From ancient grudge break to new mutiny,
Where civil blood makes civil hands unclean.
From forth the fatal loins of these two foes
A pair of star-cross’d lovers take their life;
Whose misadventur’d piteous overthrows
Doth with their death bury their parents’ strife.