Norm Butler (gotta love the first name) has written an new book titled “Building and Using Binoscopes” published by Springer. They are to best publishers of science and astronomy books for the smaller markets. 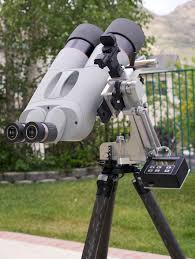 Hand made binoscopes tend to be a lot larger, really larger.  At the Texas Star Party, I saw and in-progress 39″ (1 meter) binoscope.  That will be awesome viewing when it is finished.

Binoscopes are just what they sound like “binocular telescopes”. They are a special setup of two telescopes with one for each eye. Technically they are still binoculars but once they get big they are more like dual telescopes. And they are usually made by pairing two actual telescopes together.

Norman Butler is currently writing a book on them and he is quite the expert. He has made them, used them, and been published in leading astronomy magazines about his work making them.

The picture at right shows his one of a kind custom made binoscope. It uses two Celestron 102-mm f/6 refracting telescopes with a GOTO drive and it was featured in Astronomy Technology Today Magazine.

One unique thing about this setup is the use of Microscope eyepieces rather than traditional diagonals. This gives him the right orientation and a lot of ease of adjustment. It uses a Lumicon Universal pier and binocular platform as the main part of the mount. He also did extensive modification both mechanical and electronic to this terrific setup.

Norman’s book is soon to be published Here is a look at the cover art. And you can visit the Springer Publishing website for more information: Building and Using Binoscopes

Norman P. Butler is an award winning telescope creator and published writer of telescope-building articles, some of which have appeared in popular astronomy magazines and books. A graduate of San Diego City College, Norman holds a Master’s degree in physics and astronomy. After serving in the US Navy for many years as an Opticalman, he worked for AVCO Everett Research Laboratory at Haleakala Observatory, Maui, building electro-optical equipment for use on a 1.6M and dual 1.2M telescopes. While there he also performed core measurement studies on the supermassive galaxy M-87, as well as additional galactic studies and stellar scintillation measurements. Later on Butler went on to teach at the university level in Shenzhen, China, before retiring in 2011 to the island of Saipan in the Northern Marianas. Butler has received the Engineering Merit Award and Warren Estes Memorial Award, both for homemade binoscopes that he designed and built.

We could be TWINS!!!  Except I was in Naval radar systems, and went to a different college, got a different degree, don’t speak Chinese, but other than that, TWINS I say!  Just by our love of astronomy alone.