NASA’s largest rocket yet is being developed.  The Space Launch System (SLS) should be ready for tests in 2017. 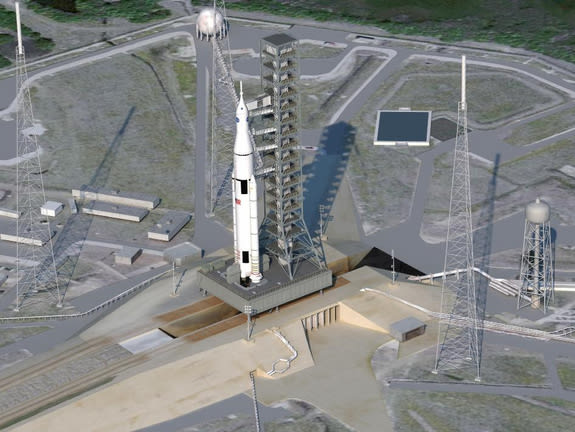 Since NASA has given up ferrying people, goods and materials to Earth orbit to private space companies, the SLS is being designed to carry astronauts farther from the planet than ever before.

The SLS was begun over a decade ago.  “We want to take NASA well beyond the space station. The SLS will be the most powerful rocket ever built, and it will be safe, affordable and sustainable.” Says former astronaut David Leestma and now part of NASA.

The SLS will be able to boost 143 tons (130 metric tons) to orbit using many existing components in its construction.  Like all recent missions, NASA has focused on using “off the shelf” materials for missions to cut costs. The main liquid-fueled engines and the the solid rocket boosters are leftovers from the shuttle program. Only the central structure is new.

NASA plans on using the new Orion capsule with the SLS, and hopes to have both systems ready for spaceflight by 2021.

The SLS will be able to deliver payloads L2, which is a stable orbit just past  the moon, or farther distances.

The power of the SLS will also let NASA to send probes directly to other planets in the Solar System without using gravity-assist swings that can save up to three years of flight time.

In addition to the new components of the SLS, some reverse engineering of legacy hardware, such as the Saturn V’s F-1 engines (capable of 1.5 million pounds of thrust), are being conducted.

“We are ready to move beyond LEO (low Earth orbit) into more ambitious missions,” said Leestma.