Two NASA space telescopes have captured a spectacular new photo of the Helix Nebula that resembles a giant cosmic eye. 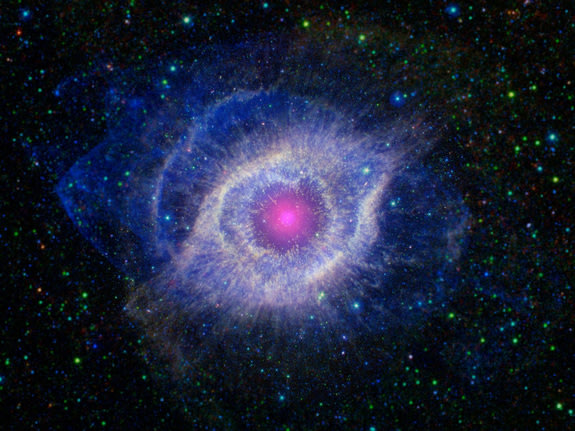 The Helix Nebula (also known as NGC 7293) represents a dying star known as a planetary nebula.  Planetary nebulas aren’t planets at all, but they were first identified and named in the 18th century because they resembled gas giants like Jupiter and Saturn, and the name stuck.

The new picture combines data from the Spitzer Space Telescope, which takes images in the infrared (the yellow part of the image), and the Galaxy Evolution Explorer (GALEX), that images in ultraviolet (the blue part of the image) on the opposite side of the electromagnetic spectrum.

The Helix Nebula is about 650 light-years from Earth in the constellation of Aquarius.   The nebula is classified as a planetary nebula.   Stars about the size of the sun, at the end of their lives, run out of hydrogen and helium fuel for fusion in their cores.  When this happens, the stars begin to expel their outer gaseous layers into glowing remnants around them.  When all the gas has been expelled, the stars collapse into a white dwarf star about the size of the Earth.

“The white dwarf is about the size of Earth, but has a mass very close to that of the original star; in fact, a teaspoon of a white dwarf would weigh as much as a few elephants!” NASA scientists stated.

The white dwarf star in the Helix nebula is the tiny white dot in the center.

If you need help with a patent, copyright or trademark matter, or know someone that can use my help, please contact me for a free 30 minute consultation at nvantreeck@usip.com or call TOLL FREE at 1-855-UR IDEAS (1-855-874-3327) and ask for Norman.