The faraway Phoenix galaxy cluster may be the biggest and brightest such structure ever discovered, and it’s forming stars at an unprecedented rate, scientists announced.

Here’s a by-the-numbers look at the Phoenix cluster — formally known as SPT-CLJ2344-4243 — which researchers say could yield key insights into how galaxies and colossal clusters evolve:

2.5 quadrillion: How many times more massive the Phoenix cluster is than our own sun. This may be an all-time record for galaxy clusters — the most massive structures in the universe, composed of hundreds or thousands of individual galaxies bound together by gravity — researchers said.

“I would say it’s in a dead heat for the most massive galaxy cluster,” Michael McDonald of MIT, lead author of the study describing Phoenix’s remarkable properties, told SPACE.com contributor Charles Choi. “The record-holder, ‘El Gordo,’ is slightly more massive, but the uncertainty in this estimate is high — it could turn out that with more careful measurements, Phoenix is more massive.”

3 trillion: The number of stars that reside in the Phoenix cluster’s central galaxy, compared to 200 billion or so in our own Milky Way. [Gallery: Chandra Spies Fastest-Growing Galaxy Cluster]

10 billion: The low-end estimate of the mass of the huge black hole at the heart of Phoenix’s central galaxy, in solar masses. That’s about as massive as the biggest black hole ever discovered.

For comparison, the Milky Way’s central black hole weighs in at about 4 million solar masses.

5.7 billion: The approximate distance of Phoenix from Earth, in light-years. The cluster is found in the Phoenix constellation, partly explaining its informal name.

However, researchers also chose the moniker as a nod to the mythological bird that rises from its own ashes, since Phoenix’s central galaxy has seemingly come back to life with a huge burst of star formation. 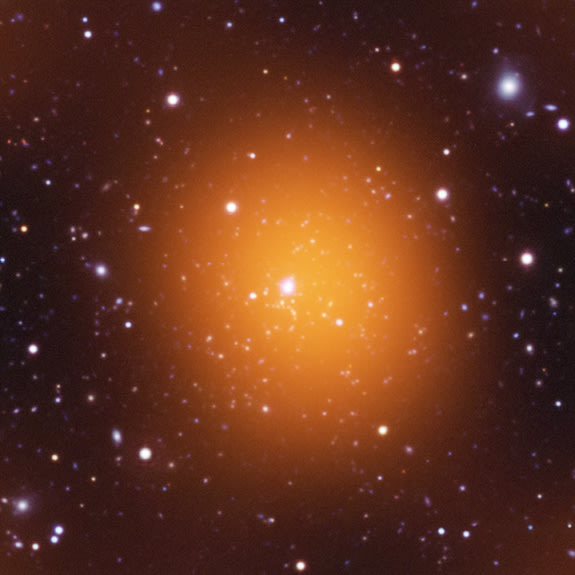 2010: The year in which astronomers discovered Phoenix, using the U.S. National Science Foundation-funded South Pole Telescope. But it took the team a little while to learn just what they had found.

“We really didn’t realize how remarkable it was until late last year and early this year, when we got follow-up X-ray and optical and ultraviolet and infrared measurements that constrained the star-formation rate,” McDonald told reporters today.

740: The approximate number of stars generated per year by the galaxy in Phoenix’s center, a new high for the middle of a cluster.

“This extreme rate of star formation was really unexpected,” McDonald said. “It’s nearly five times higher than the next most star-forming central-cluster galaxy, in Abell 1835. So it’s really crushing the record.”

Our own Milky Way galaxy produces just one to two new stars every year on average, McDonald added.